This property vinifies without use of oak. Different yes, but still one of the best sweet wines in Bordeaux 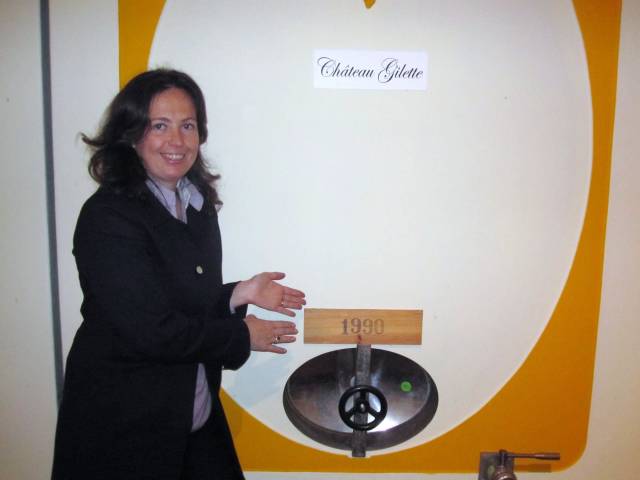 Julie Gonet-Medeville (above) runs the family business together with her husband, Xavier

Both Chateau Gilette and sister property Chateau Les Justices are seldomly mentioned in the winepress and wine-journalists usually drive quickly through the village of Preignac to check out classified growths instead. properties. It's a pity because they would easily discover, how really excellent wines are made there!

Gilette and sister property Les Justices has been run by Julie Gonet-Medeville and her husband Xavier Gonet (who comes from a famous family in Champagne, Gonet), since 2004, when they took over from Julie's parents, Christian & Andrée Medeville. I've known Christian and Andrée Medeville since 1987 when I first visited Gilette, and both wines hit me that hard with their excellency, that I haven't recovered yet. Both are awesome wines at their own level.

Julie takes care of marketing and travelling abroad to spread the fame of both estates, while Xavier takes care of vinification. And both do an excellent job. Julie is fully educated lawyer but left that path and decided to carry on the family tradition.

This property has been owned by Medeville family since 1710. It's situated in Preignac commune; the soil here is sandy with subsoil consisting of stones embedded in clay. There is 4.5 ha of vines planted with 90% Semillon, 8% Sauvignon Blanc and 2% Muscadelle. The average age of vines is 40 years and yield per ha varies between 9 and 15 hl, all depending on the vintage.

Only must with sugar content corresponding to at least 20% alcohol is allowed to be further processed. Vinification is classic and traditional, but when it comes to the ageing of wine, then Gilette is a total break with winemaking traditions in the district. It ages in 15-20 years (!) – and only in small sealed concrete vats, where all air is removed. No oak barrels here!

The purpose of this kind of ageing is that the wine doesn't get any other taste from barrels and keeps its freshness and vigour. If you are a Sauternes freak, then Gilette is a must, even if not everybody will like its "heavy" style (rich on alcohol) with fresh sweetness and energy, because some got used through the years to the "old" (in wines with quite some age) sweetness, which is to be found in traditionally made wines.

For me, Gilette is very often among the very best wines in the district challenging the "king" d'Yquem. A superbly concentrated wine with freshness, fantastic botrytised flavours like almonds (imho the very typical flavour for Gilette), acacia honey, mandarine/mandarine peel, orange confit, peach and honey melon.

Gilette is quite expensive, but one has to understand that cost of product returns back to Gilette earliest 20 years after the harvest (16 years ageing + 4 years in bottle before release) because of its specific production method.

Tasted in April 2017. This wine is the newest release from Julie and Xavier Gonet-Medeville. 20 years in concrete vats. Tasted like honey essence, fresh and very intense, with the hallmark flavour of the property, grilled almonds, then mango and great acidity. Simply stunning!

Tasted twice - last time in April 2019. Consistent notes. In this vintage, grapes were dried by wind (passerilage) and not by a huge attack of botrytis. Anyway, it possessed very good sweetness, almond flavour, intensity and concentration, very nice acidity and length.

Tasted in April 2010. Tighter, richer and more concentrated than 1986. A stunning example of Sauternes at the age of 22 years with extraordinary freshness and vitality.

Tasted three times - last time in December 2016. Consistent notes. More open than 1988, almonds again, fresh, incredibly scented on the nose and palate, sophisticated, great depth and backbone, long and velvety on the palate with the strong and fat finish. This is a heavenly treat and marvellous wine. In December 2016, it gave 1986 Yquem run for the money!

Tasted four times - last time in April 2010. Consistent notes. This wine gives 1986 run for the money and is close to 1988 in terms of depth, concentration and intensity of botrytised flavours. Fantastic fragrances ranging from acacia honey, almonds, apricot, candied peach and mandarins and mango. An astonishing piece of winemaking.

Tasted three times - last time in April 2010. Consistent notes. The same style as 1981 but I find 1979 more powerful, richer and longer on the palate.

Tasted in April 2003. Spicy acacia honey, quite alcoholic, créme brulée, elegant, well-balanced. Lighter than usual but has immediate appeal due to its roundness and soft texture.

Tasted twice - last time in December 2006. Consistent notes. This vintage is one of the most famous in Sauternes and Gilette is among top wines but not as phenomenal as d'Yquem and Climens. Almonds marinated in Grand Marnier, fresh, incredibly scented on the nose and palate, sophisticated, great depth and backbone, long and velvety on the palate with the strong and fat finish. Awesome intensity and structure. First tasted in June 1990 - hasn't changed at all for 16 years. What proof of ageing potential!

Tasted in June 1990. One of the best ever sweet wines I've tasted. It was true nectar of Gods with everything sensational in this wine. I*m running out of superlatives!!

Sister property of Gilette. The vineyard covers 8.5 ha of vines. planted with 88% Sémillon, 18% Sauvignon Blanc and 4% Muscadelle. Vines are 25 years old on average. Some decades ago Les Justices was vinified in the same way as Gilette, but with only 4 years' stay in concrete vats. Nowadays it's vinified traditionally and ageing takes place in concrete vats for 18 months.

Les Justices is excellent value for the money and is often better in terms of quality and consistency than several highly-priced classified growth in Sauternes & Barsac. It's 1/6 of the price of Gilette.

Tasted in April 2017. A bit on the light side, elegant and with a lot of finesse. Catchy sweetness, tasty and with nice acidity.

Tasted in September 2011. Even more intense flavours here, more concentration and bigger length. Excellent for the vintage as well.

Tasted in October 2010. Resembles a lot of 2006 vintage, maybe 2008 has more botrytised flavours to show and expresses more intensity.

Tasted in April 2010. More intensity here than in 2009, beautiful acidity and sweetness, long on the palate, lingering honeyed aftertaste. Great balance and richness. Formidable work in the cellar.

Tasted in April 2010. Quite less intense and less rich on the nose and palate than 2007. Still, it's a fine quality wine.

Tasted in April 2010. Atypical for the property by being thick and heavy, but no complaints from me! Brown sugar, tropical flavours (mango, guava, sweet pineapple and candied mandarine peel). Acidity is just splendid and doesn't allow the sweetness to take command here. Very intense. long and with long, fat and honeyed aftertaste. Will go excellently with heavy spiced Asian food due to its high content of residual sugar.

Tasted 4 times - last time in April 2010. Consistent notes. Fantastic nose of botrytised flavours like molasses, brown sugar, peach, acacia flower/honey and melon. Stunning richness, depth and acidity, concentration and length. The finish goes on and on. This is an angelic treat for the money and mind-blowing effort from this not classified growth.

Tasted in April 2003. Not exactly pure botrytised flavours - the sweetness comes from wind-dried grapes. Elegant, charming, quite intense and well-structured. A nice wine to be enjoyed while you wait for the famous vintages.