One of the best wines in Bordeaux, exceptional and long-lived Pomerol 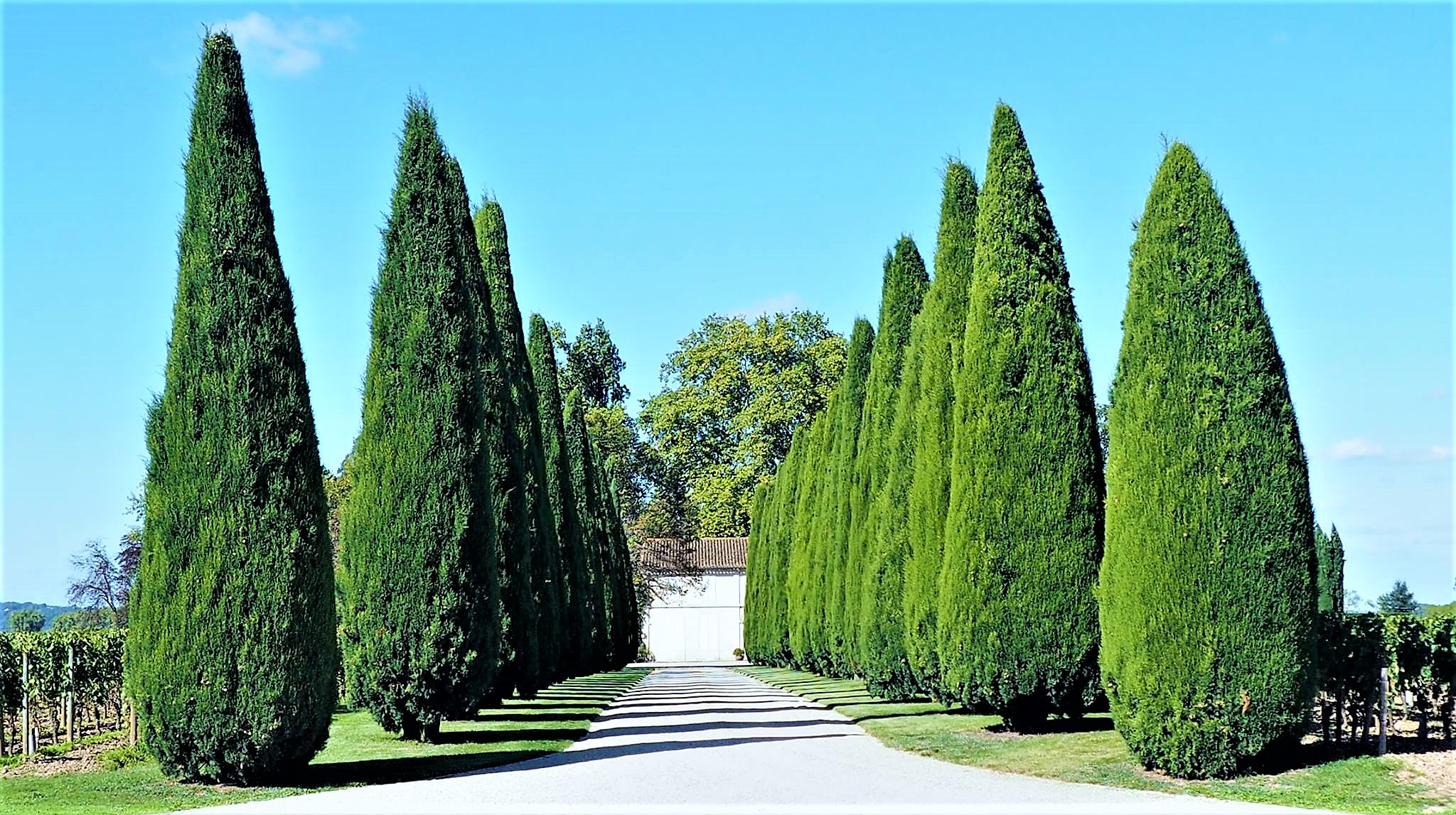 This property was created in the middle of the 17th century by Fontemoing family which also owned Canon in Saint-Emilion at that time. Some hundred years later the new owner was Giraud family. Giraud's ownership lasted until shortly after the end of Second World War when Trotanoy was sold to Pecresse family. Pecresses kept Trotanoy for app. 8 years and sold it in 1953 to Jean-Pierre Moueix. From to have around 25 ha of vines in the middle of the 19th century, the vineyard became smaller and smaller in size due to several parcels being sold because of inheritance and lack of money. It covered only 11 ha in 1929, and today Trotanoy is app. 7.2 ha.

Trotanoy is situated in the middle of the Pomerol district, and you reach it when passing railway line after leaving Libourne, coming to the little round-about where D244 road to Catusseau starts and turning left. Few kilometres. It's located just outside the eastern part of the district, called "Le Plateau Argileux", where clay and famous "crasse de fer" (iron dirt) are very predominant and where all the best properties in Pomerol are situated. Trotanoy vineyard borders to the north hamlet of Bourgneuf and Chemin de La Cabanne road to the east.

This property, however, isn't neighbour to its famous brother estate, Petrus, situated further east, as some sources write their info about Trotanoy. The distance between those two properties is app. 1.8 km and both vineyards don't touch each other. Trotanoy is very recognisable and easy to find, because of an alley leading to the property with cypress trees on both sides of it (see the picture above).

Trotanoy's soil is gravel on the bed of heavy black clay mixed with gravel and iron dirt (crasse de fer). It's like that in the lower part of the vineyard, while in the more elevated part there's much more clay, still a black one. Its name probably originates from "trop ennui" (hard to work with), referring to soil composition. 7.2 ha vineyard is in one block and planted with 90% Merlot and 10% Cabernet Franc, vines are on average 35 years old, and the wine spends 16-18 months in 50% new barrels after traditional vinification in small concrete vats.

Trotanoy is an utterly complete wine, robust, corpulent and with strong backbone, but also with much elegance, finesse and sophisticated touch. It's a very long life span, so you think Trotanoy can live forever! Occasionally, it gives his famous brother, Petrus, a run for its money. For me, it's among three very best Pomerols, together with Petrus and Lafleur. And of course, it's one of Bordeaux best wines! 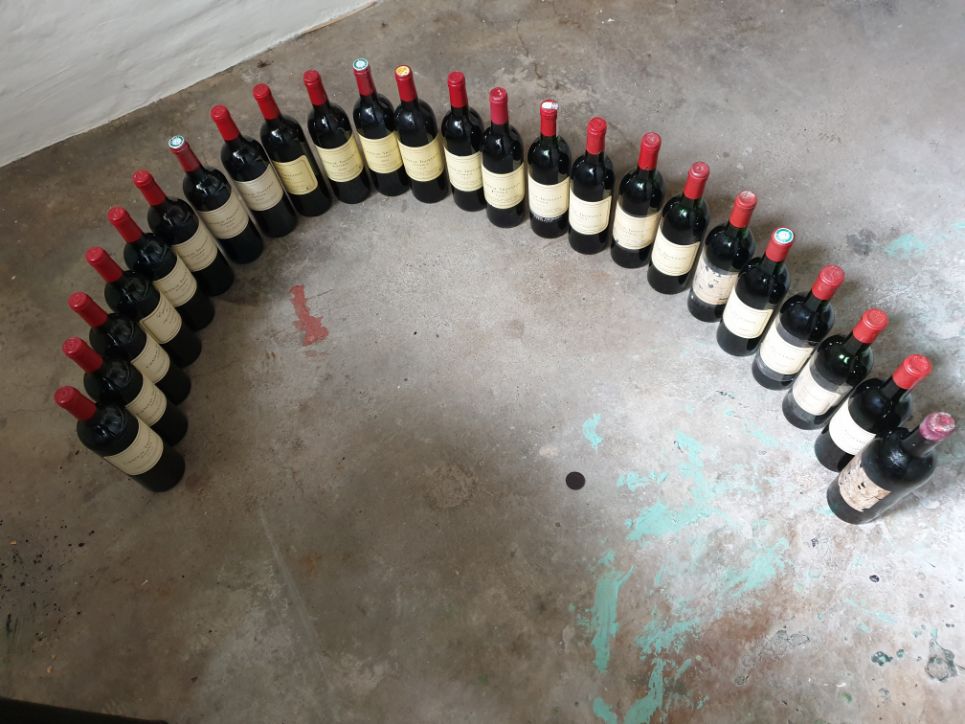 All 23 vintages of Trotanoy + 1 of second wine lined up

Tasted in October 2019. Intense blackberries/raspberries, elegant and sublime, sophisticated, excellent structure and complexity, not a powerhouse but rather finesse and subtlety here. Decadent stuff.

Tasted in March 2020. Not the perfect showing right now and looked like that this bottle suffered very slightly from oxidation. A bit edgy, tannic, concentrated with firm acidity. Needs time to soften. It's a young Trotanoy who has closed its doors for several years. I acquired it together with 2015, 2012, 2010 and 2009 from the same Danish wine merchant who gets Trotanoy directly from ETS. Jean-Pierre Moueix. Stand A.

Tasted in March 2020. Intense raspberry drops, powerful yet elegant, dense structure, refined with splendid complexity. Fresh and with marked acidity which keeps everything together and chic. Young and vibrant wine, which is 10-15 years, be a great delicacy to drink. Stand A. 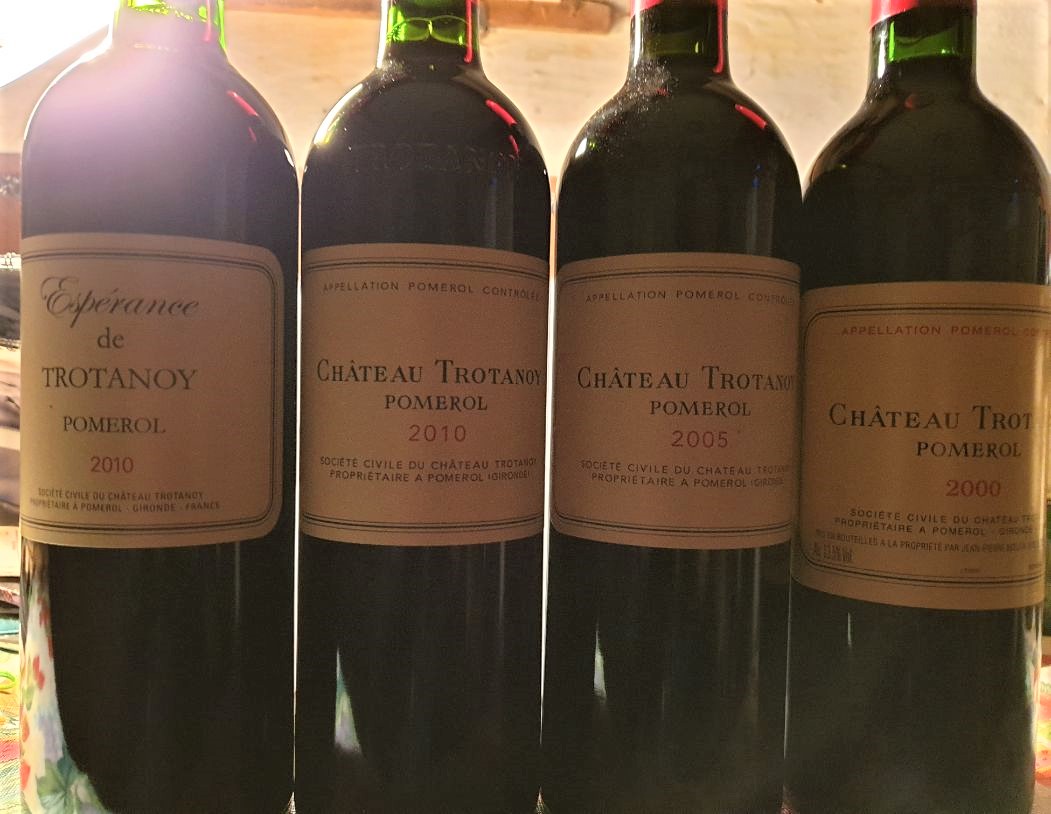 Tasted in March 2020. Competed with 2015 and 1998 in the flight and it was a tough ride! These two vintages outdid it. It felt a bit diluted compared with its competitors. Splendidly put together, very complex and long, but for me, it lacked a bit of excitement, fatness and intensity of 2015 and 1998. Stand A.

Tasted in March 2020. A clear winner of the flight. Very strong and concentrated with gobs of dark cherries and truffles, all that controlled by acidity, high complexity and depth. Refined and sophisticated with stupendous length. Stunningly sublime wine. Stand A.

Tasted in March 2020. So typical for the vintage with tannic profile, tightness, iron strong structure, copious cherry fruit with truffy scent. A very balanced wine, which needs more than ten years to soften. The future is more than bright. Stand A.

Tasted in March 2020. This bottle together with 2004 and 2008, was purchased from a very reliable wine shop in mid-France, bottles came directly to it from Ets. Jean-Pierre Moueix and were stored in perfect conditions. Aromatic with a splendid intensity of black fruit and cherries. Sophisticated and elegant, delicious, very potent with great complexity. Silky texture. Many years to go. Delightful effort. Stand A.

Tasted in March 2020. It was a great, great bottle from a magnificent vintage. Competed with Trotanoy 2010, Esperance de Trotanoy 2010 and Trotanoy 2005 in the same flight. Incredibly exciting to compare some of Bordeaux most exceptional vintages to date! This wine was super confident, dressed in truffles and black cherries, incredibly refined and sophisticated, had a strong backbone, significant depth, fabulous complexity and length. Stand A-A/B.

Tasted in March 2020. Fat, ironclad, truffles, plenty of perfectly ripe fruit and grained tannin, tons of black cherries, impressive structure, complexity and length. Sophisticated and utterly remarkable wine! At least 25 more years to live if not much longer! Purchased en primeur in Danmark for a ludicrous amount of 66 Euros per bottle in 1999. Only one travel for this wine - from France to Denmark. Stand A. 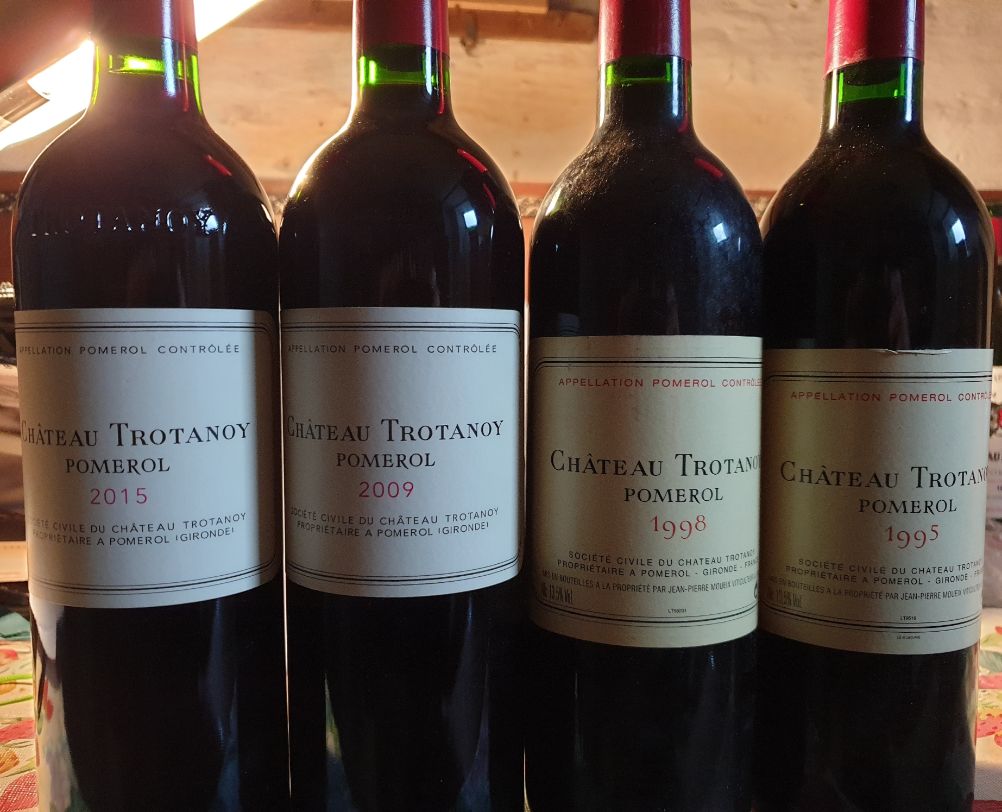 Tasted in March 2020. Showed all the goodies associated with the character of this vintage, which was very successful in Pomerol. Strong and potent, well-equipped with black cherries and truffles, silky texture, excellent balance, deep and refined with striking complexity and length. Long finish. Impressive stuff. Long long life. Stand A-A/B.

Tasted in March 2020. It was a big harvest in Bordeaux in this vintage. I was in Bordeaux during harvest and grapes were just big but in excellent condition. Yield per ha around Bordeaux reached 70 hl at many estates. I think this vintage suffers a bit of dilution, but in the whole, it's a pretty, feminine wine, graceful and tasty, cherries and grated chocolate, well-balanced and with a smooth fruity finish. Stand B.

Tasted in March 2020. The big surprise here. Sourced from a winemerchant in Holland and it turned out to be an epic bottle. Put in the flight together with 1970 and 1978. 1983 had blown wines both far, far away down the road. You might think this wine was not up to its one year younger brother from more famous vintage (1982)? Think again! It was almost equally impressive! Powerful, young, stunning depth and complexity and silky. Stand A. 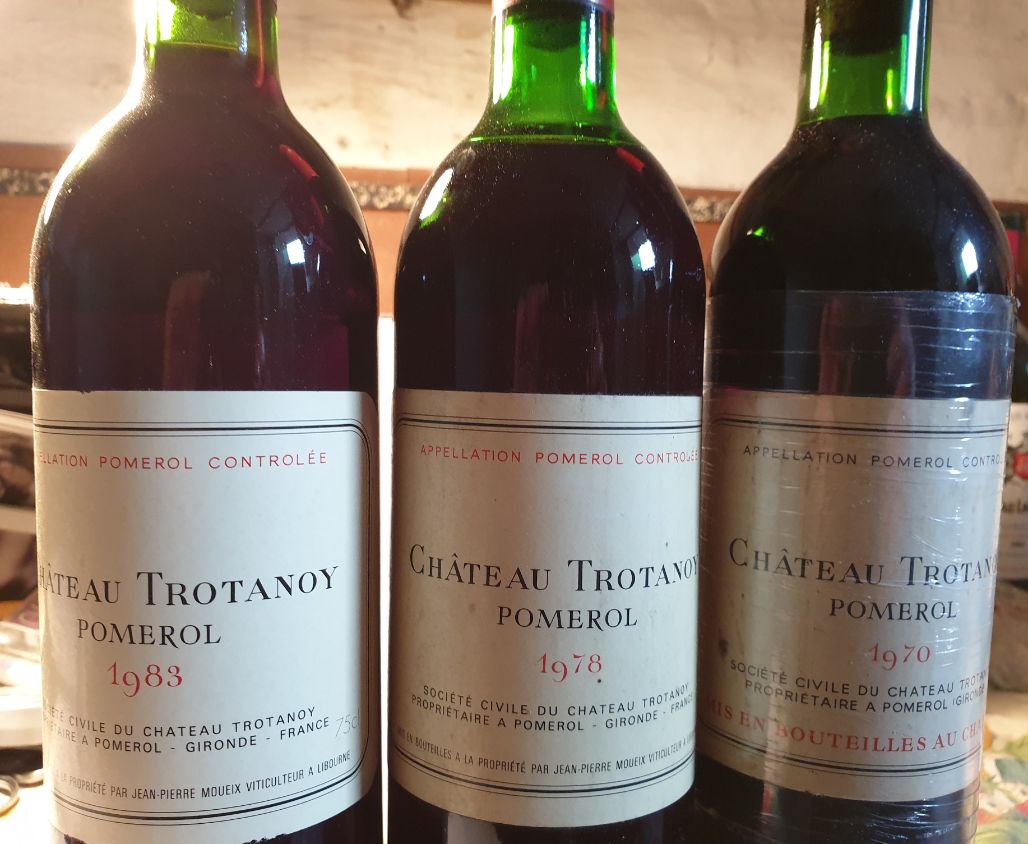 Tasted in March 2020. Bull's eye!  This bottle did catch the attention immediately. Strong and compact with aura of sophisticated touch over it, incredibly tasty cherry fruit, truffles and chocolate, silky texture, incredibly structured and long. Simply an impressive bottle to taste! Stand B/C.

Tasted in March 2020. Very good wine, but that's it. Didn't challenge much the other wines in the tasting simply because it lacked the intensity, concentration and depth of these. Elegant, round and tasty, but also starting to be well past its peak. Stand B/C.

Tasted in March 2020. Very close to 1971 and 1964 in terms of power, structure and length. Great, great complexity, richness and sophisticated touch. Utterly impressive wine with still many years left in the tank. Stand B.

Tasted in March 2020. A lighter version of 1971 and also showing more age. 1971 vintage is considered a better one on the Right Bank than 1970. Nothing to complain about here, however, because there are finesse and elegance, plus an adequate portion of black cherries with truffles to please the taster. At its peak now. Stand A-A/B.

Tasted in March 2020. A bit edgy and not showing that much fruit. This is typical wine for this vintage which isn't that "friendly" and open for business. However, the structure, balance, depth and length are very much in the right place. Stand B/C.

Tasted in March 2020. Turned out to be a fabulous example of Trotanoy. Fat and dense with a very intense nose of black cherries and truffles, packed with fruit and an adequate portion of grained tannin. Strong backbone, great complexity, sophisticated and long, long finish. It's hard to believe that this wine is only 56 years old because it tasted younger than that! Stand B. 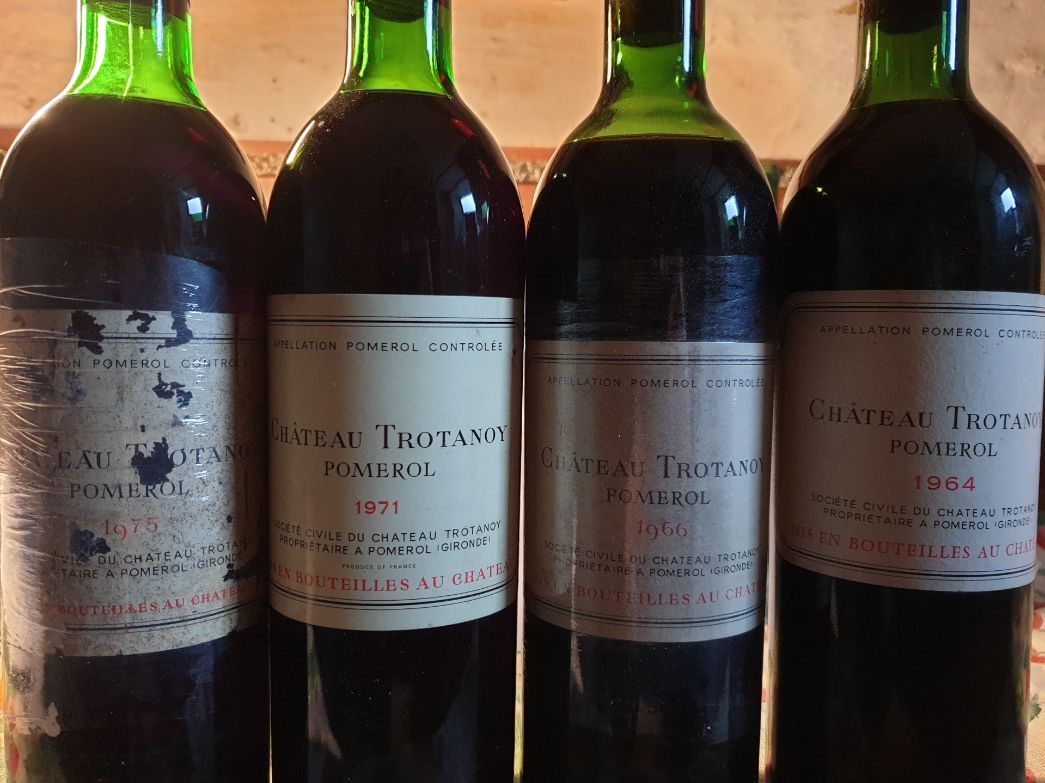 Tasted in March 2020. A true rarity I have to say. Old heavy Bordeaux bottle, label muggy and not that readable. I don't think it was a chateau bottling. It looked like a negociant one. Little fruit, a bit medicinal, still some truffles left. More curiosity than a bottle of real wine. Stand D. 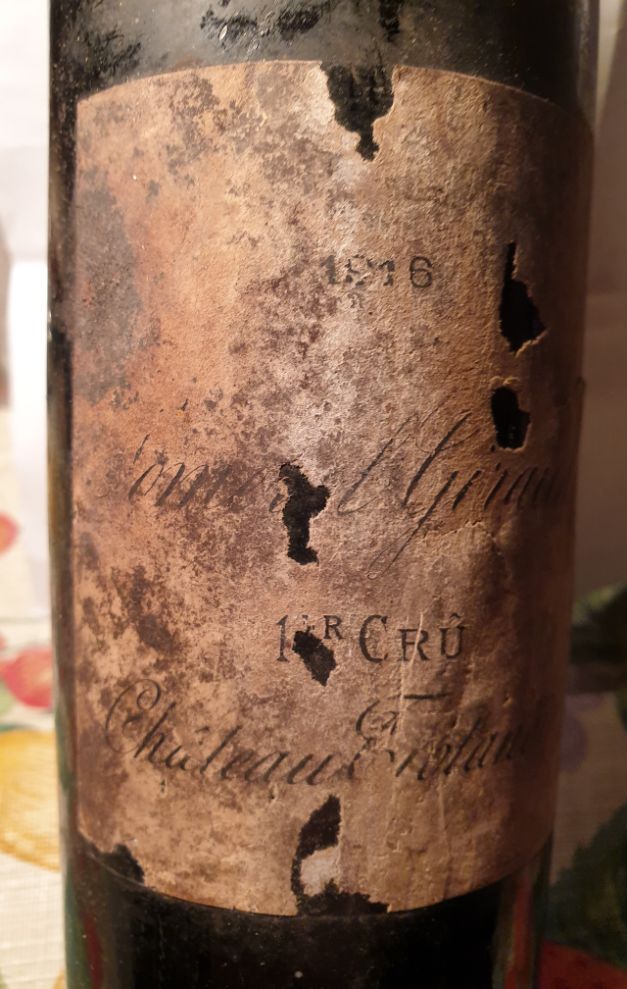 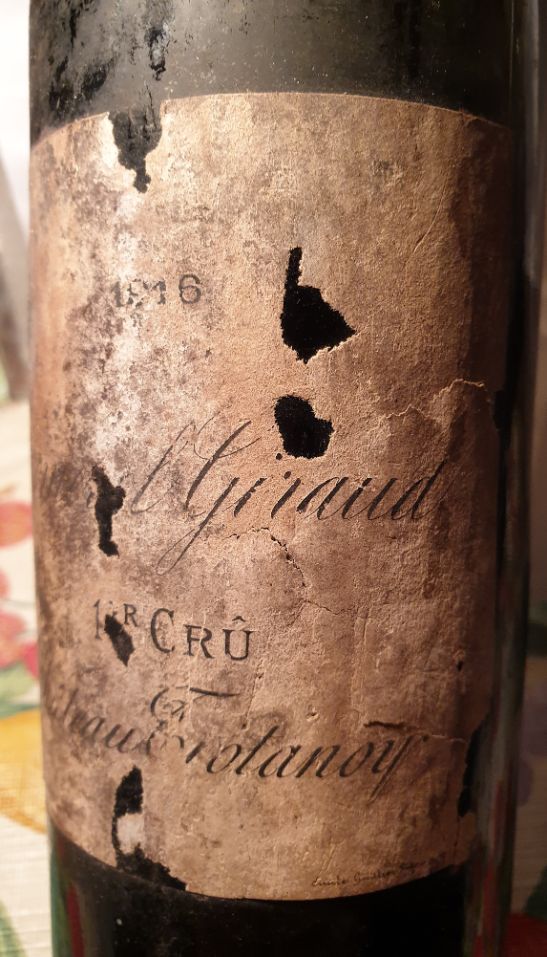